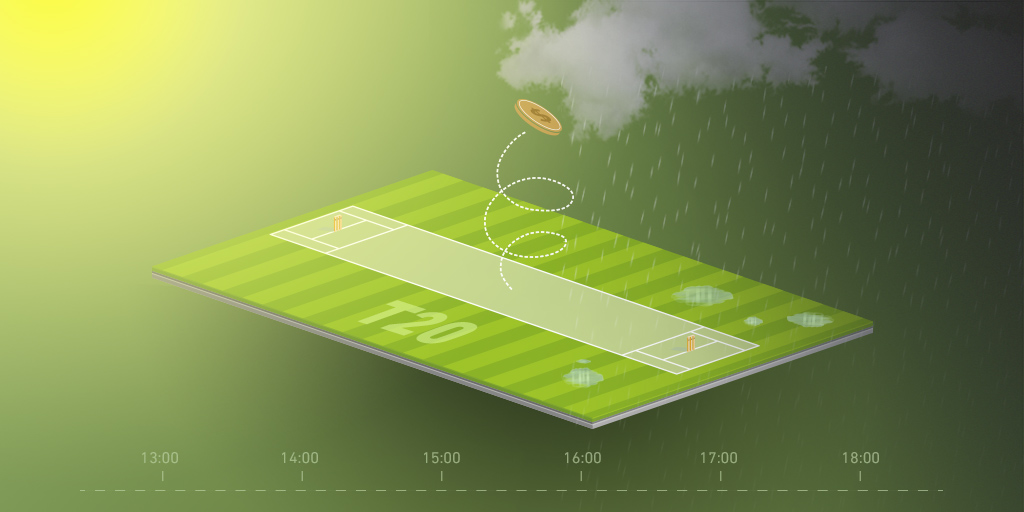 In the space of ten years, T20 cricket has grown from a sport on the fringes of the public’s interest to one of the biggest versions of a sport in the world and betting popularity on the sport has grown accordingly. There is no better time for bettors previously unfamiliar with cricket to get to grips with the sport and learn how to use a cricket betting strategy. Read on for some T20 betting insight.

Cricket arguably has the highest number of factors to consider before placing a bet. The different rules for each format will influence betting decisions – something summarised how to bet on cricket guide. This article takes a more in-depth look at areas bettors should think about when betting on the phenomenon that is T20 cricket.

Cricket betting strategy – keep an eye on the weather

The first factor that should always be considered is the weather. While it is fair to suggest that the weather impacts many sports – soccer and golf betting being other notable examples – it is difficult to argue that the weather has a greater effect on any other sport than cricket. This is simply because if there is any inclement weather, the match is simply abandoned and does not get played.

Weather-affected matches in T20 cricket are common, and bettors would be well advised to use the plethora of online resources available to assess the likely conditions in advance. Each team will need to bat for a minimum of five overs each for a result to stand using the Duckworth-Lewis method.

Generally speaking, playing after a spell of rain will hinder the bowlers, particularly spinners, who will struggle to grip and turn the wet ball. This is also the case for the effects of dew, which is more likely to take place throughout the latter stages of the match.

While dew has a more profound effect in some countries compared to others, it is one of the many areas that captains must consider when they win the toss.

Cricket betting – the importance of the coin toss

On the subject of the toss, it is fair to suggest that, as with the weather, the toss is more important in cricket than any other sport. Consider soccer and tennis – the only benefit that winning the toss generates is to choose which end to start at, or to kick off or serve first. In cricket, the difference between batting first or second is huge.

The former England cricketer, WG Grace, once described the toss in test cricket very succinctly, suggesting that “when you win the toss – bat. If you are in doubt, think about it, then bat. If you have very big doubts, consult a colleague – then bat.”

Given the deteriorating nature of pitches over the five days of test cricket meaning that batting last is an extreme disadvantage, this is undoubtedly true. However, with T20 cricket matches taking place over just a few hours, pitch deteriorating is less of a factor. The effects of dew, as well as teams being able to pace a chase better knowing their target, makes batting second in T20 much more of an advantage.

Numbers also back up this statement – in the IPL (Indian Premier League) from 2014 to 2016, teams batting first scored 8.24 runs per over while teams batting second managed 8.34 runs per over. However, some teams are yet to quite understand that chasing tends to offer greater value, and often choose to bat first – in England’s T20 Blast, Surrey are a notable example of this.

eam news is also a critical aspect worthy of assessment. The captains generally announce teams after the coin-toss, giving bettors around 30 minutes to react to the team news prior to the start of the match. The team selection in soccer might be easy to predict, but this isn’t always the case in T20.

T20 teams have large squads and many franchise leagues have numerous overseas players (of whom only a limited number can be included in the team). Therefore team selection is frequently questionable and often far from maximises a team’s expected value for the given match-up.

Statistically, some teams still have much to learn regarding the value of certain players and make very poor decisions regarding team composition. Therefore, pre-match bettors are well advised to wait for team news and results of the toss before deciding if the composition of either team represents value.

Finally another area which isn’t discussed often amongst bettors in T20 cricket is home field advantage. Looking at this subjectively, when playing at home, teams have the benefit of better knowledge of conditions, such as how the pitch is expected to play and whether some boundaries are shorter than others.

As with choosing to chase, data also shows that home advantage does exist. For example, in the IPL from the start of the 2016 season until matches completed on the 1st May 2017, home teams managed to accumulate 8.57 runs per over compared to 8.31 per over for away teams.

Furthermore, not only were home teams able to score runs at a much quicker rate, in this sample their wickets also were worth more runs, costing 30.32 runs per wicket compared to 26.42 runs per wicket for away sides.

These areas are just some aspects worth considering prior to betting on T20 cricket.